“I have a very special connection with the University of Redlands,” the Karmapa said. “The two occasions that students came for the course in India were wonderful experiences for me. Among the many reasons to visit here today, my favorite is to be able to reunite with old friends. Being here feels like coming home.” In 2011 and 2013, two groups of students from Professor of Religious Studies Karen Derris’ Johnston Center May Term seminars traveled to India to study with the Karmapa. His conversations with Redlands students in 2011 formed the basis of his book, The Heart is Noble: Changing the World from the Inside and Out, which was co-edited by Derris, who is also co-editing a second book based on the 2013 visit. The Karmapa met again with these 20 Redlands alumni during his two-day visit to Redlands.

“By welcoming two groups of University of Redlands students to learn from him at his temporary home, Gyuto Monastery in India, His Holiness inspired our students to define a meaningful life,” said former University Interim Provost and Chief Academic Officer David Fite. “He models for us how the efforts of one person’s work for environmental protection, gender justice and intentional use of resources in a consumer-driven globalized world inspires our entire University of Redlands community.”

Redlands was the only Southern California stop during the Karmapa’s two-month visit to the United States, and while here His Holiness met with Redlands faculty and students, attended a Religious Studies class, toured the campus and met Thurber, the University’s bulldog mascot. A laurel “peace tree” was also planted on campus to commemorate his visit and to honor the traditions, teachings and beliefs of the Karma Kagyu School of Tibetan Buddhism. “The University is proud to bestow the honorary degree of Doctor of Humane Letters upon His Holiness in recognition of his deep commitment to building a compassionate world by illuminating and encouraging the interconnections that unite us across differences of language, culture, religion or worldview,” said Fite.

“I can see that many people of today’s generation of youth are aware of the responsibility they have for the future of this planet,” the Karmapa said. “In speaking to them on this trip, I want to encourage them to see that responsibility not as a burden, but as an opportunity.” 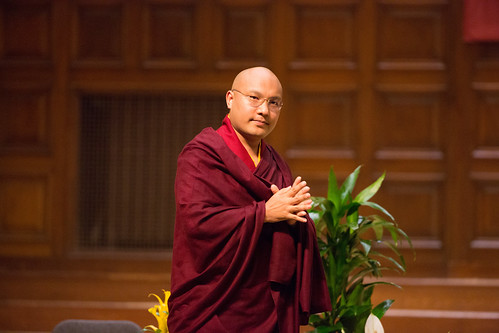